Look out: How to identify invasive plants on your local waterway

You may think that having a wide variety of plant species on your local waterway is a good thing. But although variation is undeniably good for biodiversity, the types of plant that grow in an ecosystem are extremely important. Indeed, every species is not suited to every habitat.

If a plant that isn’t native to an area takes root, it is called an invasive species. Far from bringing biodiversity benefits, invasive plants can actually cause harm. In the UK, we have a number of invasive plants that can be dangerous or disruptive and many of these are found on and around our waterways. As you go out to assess water quality, use this guide to help you identify these troublemaking plants

The Himalayan Balsam spreads quickly, forming dense thickets that alter the ecological balance of wetland habitats. The plants utilise the waterways where they grow to disperse seeds. Its seeds drop into the water, flow downstream and take route on new land and riverbanks. With the ability to spread seeds up to four metres away, it is little wonder that the Himalayan Balsam is so successful. However, this means that it takes nutrients and sunlight from other plant species and often dominates riverbank ecosystems. As other species can no longer survive, this reduces the overall biodiversity of an area. This is especially problematic as the Himalayan Balsam dies back in the winter to leave riverbanks bare. Without plant cover, these banks are vulnerable to erosion.

The Japanese Knotweed is native Japan, China and Korea  but was originally introduced in the UK as an ornamental garden plant. It is versatile, growing near waterways, in ditches and even near urban environments.

Japanese Knotweed is powerful and strong. Even sturdy, man-made infrastructure can be infiltrated – reports have found Japanese Knotweed undermining the foundations of buildings. The strength of the plant lies in its root system which is capable of growing through paving, tarmac and flood defences.

As the name suggests, this plant is native to America. Growing from Northern California to Alaska, the American Skunk Cabbage can survive a range of weather conditions. Although it was first brought to the UK in 1901, it didn’t escape into the wild until 1947.

The American Skunk Cabbage thrives in wet habitats. Often found on pond margins, the edges of streams, in bogs or wet woodlands, it is likely that you will encounter this species during your water quality assessments.

Studies conducted in Hampshire have reported declines in other species in the areas where American Skunk Cabbage has established itself. Although unconfirmed, there have been reports of similarly negative impacts in Germany.

Native to America, Floating Pennywort was first introduced to the UK in the 1980s as an ornamental, aquatic plant. However, it didn’t stay confined to our ponds. The plant quickly spread into our waterways and is still considered by many as the worst aquatic weed in the UK.

Floating Pennywort can cause a range of issues to our ecosystem. Firstly, the plant can spread over large areas as it produces a seed-carrying fruit that can float on water. Secondly, it can quickly overwhelm a habitat, reducing the overall availability of oxygen for other plants and fish species. Finally, this species can also harm human infrastructure. For example, blocking drainage systems and pipe networks.

Giant Hogweed was introduced to Europe in the 1800s after it was collected in the Caucasus Mountains. The earliest record of Giant Hogweed in the UK was in 1817 when a sample was brought to Kew Gardens. Since then, it has colonised river banks across the UK.

When Giant Hogweed dies, the flowers release seeds that flow in river water until they take root in a new location. Grow close together, Giant Hogweed can prevent other plants from accessing sunlight and, as such, it quickly dominates an area.

If you identify Giant Hogweed on a river bank, do not try to remove it. The plant produces a sap that can cause burns if it comes into contact with human skin. This is particularly painful if you are simultaneously exposed to sunlight – it can cause you to develop recurring blisters that can last for months.

Native to Southern Africa, Curly Waterweed was first recorded in the UK in 1944. Unsurprisingly, this plant thrives in watery environments and was intended as an ornamental garden pond plant. However, like other invasive species, it soon spread into the wild.

Curly Waterweed grows fast so tends to outcompete most native species. When many plants grow together, they can cause fluctuations in the availability of oxygen in the water which is harmful to fish populations. In densely packed groups, Curly Waterweed can even prevent water flow into drainage systems and cause flooding.

Like many invasive species, the water primrose was originally introduced to the UK as an ornamental water garden plant. It originates from Australia, New Zealand, North America, and South America but has rapidly (and problematically) established itself in the UK.

The plant can have a hugely negative effect on native habitats. Its excessive growth can outcompete native species, clog waterways and increase risk of flooding. Banned from sale in 2014, the removal of Water Primroses is taken seriously in the UK. It is even on a rapid response list, meaning that when it is spotted, it must be reported for immediate eradication.

The Himalayan Knotweed is very similar to the Japanese Knotweed, yet it originated from western Asia. It was introduced to the UK as a garden plant in the Victorian era before rapidly spreading to wild habitats. Although you can still purchase it today, it is increasingly less common.

Himalayan Knotweed can grow in dense stands. Similarly to other invasive plants, these dense gatherings block sunlight from other, lower-lying plants and prevent them from growing. It can also damage drains and sewers.

What should I do if you find an invasive plant?

How to prevent the spread of harmful invasive plants

You can cut plants back to prevent seed dispersal or you can dig them out to stop regrowth. Whatever your method, you should burn the debris to prevent the plant from taking root elsewhere. 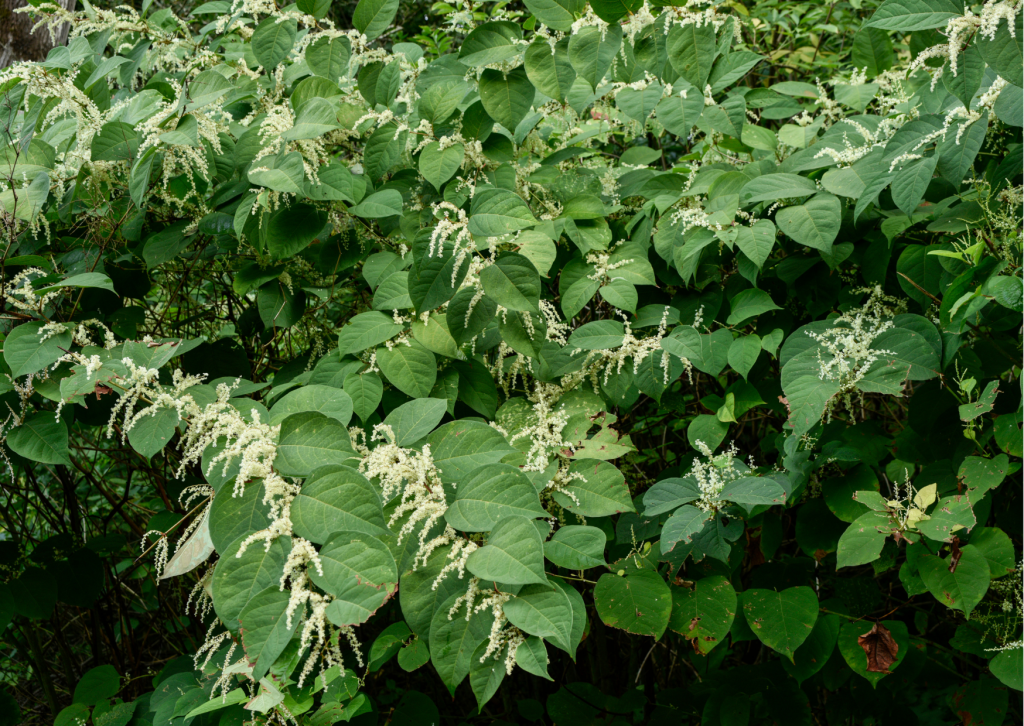