Which countries have banned plastic bags?

Since Bangladesh became the first country to introduce a ban on plastic bags back in 2002, other governments around the world have adopted a similar approach in efforts to protect the environment, wildlife and human health.

Over 80 countries now have a full or partial ban on single-use plastic bags – including more than 30 African countries – and the list is growing every year.

Bag Bans around the world

Kenya introduced a ban on plastic bags in 2017, which has since been called the “world’s strictest” plastic bag ban.

The ban was put in place to combat severe flooding, caused by plastic bags blocking waterways and drainage systems. A government-supported study also showed plastic bags were found in the stomachs of more than half of cattle [1].

The legislation prohibits the manufacture, importation and sale of plastic carrier bags, punishable with a maximum of four years in prison or a $40,000 fine.

The state of New York officially banned the distribution of single-use plastic carrier bags in October 2020, making New York the second US state to introduce a ban after California in 2014. The purpose of the ban is to curb litter and reduce the greenhouse gas emissions caused by plastic production [2].

There are some exceptions to the ban where plastic bags are still permitted, such as for takeaway food, uncooked meat and prescription drugs.

Any retailers or business owners found breaking the rules could be subject to a $500 fine.

Thailand enforced a ban on the sale of plastic bags in all major stores and supermarkets from 1st January 2020. The country plans to extend the ban to all retailers and businesses by the end of 2021 [3].

Reports say the aim is to eliminate the 7 most common litter types that threaten marine life in Thailand by 2025. These include: plastic bags, bottle cap seals, disposable cups and straws.

People in Thailand have been seen trying creative new ways of getting their shopping home, from suitcases to wheelbarrows, granny-trolleys and buckets, as well as the more conventional reusable shopping bags.

Plastic bags have been banned in Rwanda since 2008, with strict policies that include luggage searches at the border where any plastic bags found are confiscated. Anyone found violating the plastic bag ban law may receive a fine or, in more serious cases, a prison sentence. A typical fine for anyone found using a plastic bag is around $60 / £42 [4].

The legislation was put in place to prevent flooding caused by bags blocking drainage and sewage systems, and to stop plastic bags being burned after use, releasing toxic pollutants into the air.

These countries have all proved their commitment to bring an end to the damage caused by plastic bags. It’s time the UK did the same and introduced an outright ban on plastic bags; both single-use and bags for life.

Add your name to the petition to call for the UK government to enforce a ban on plastic bags.

Read more about the Big Bag Ban and why the UK’s current legislation to reduce the environmental impact of plastic bags isn’t working. It’s time the UK banned the bag too. 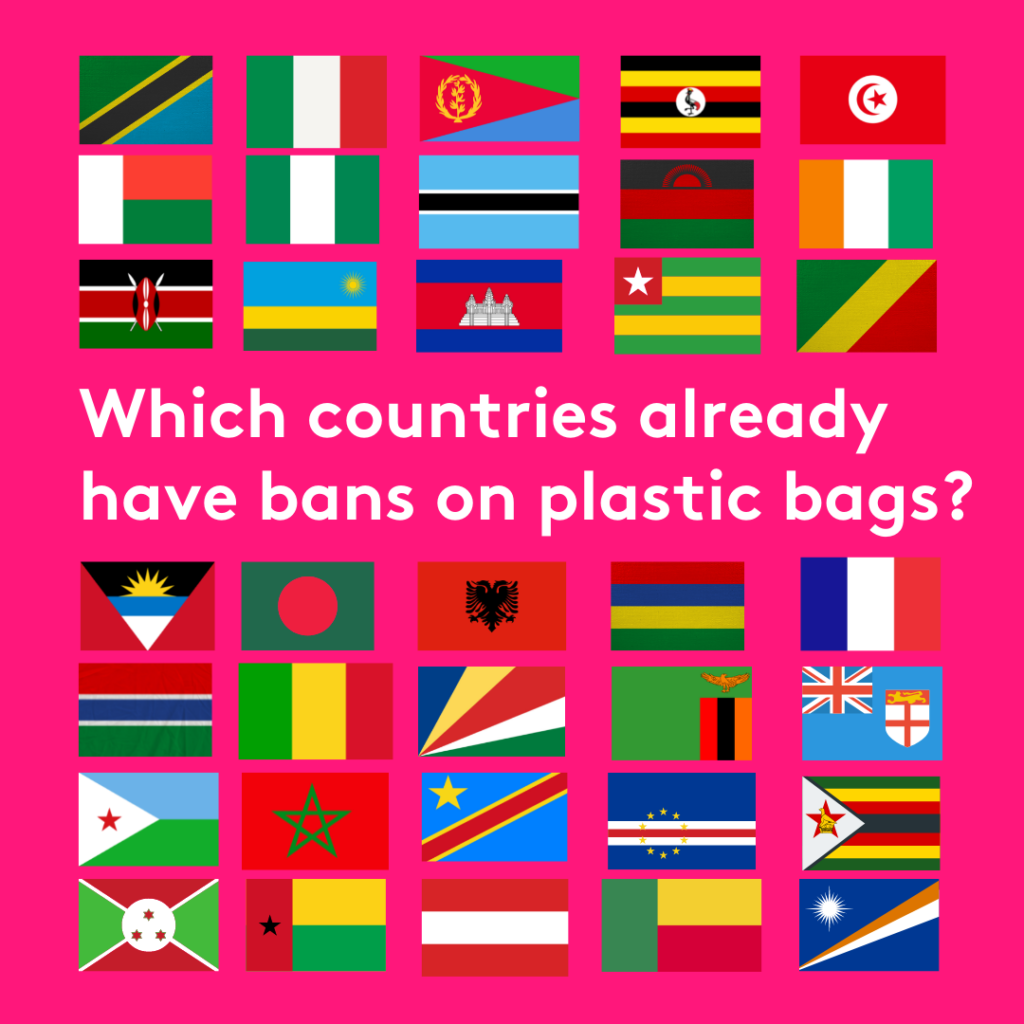